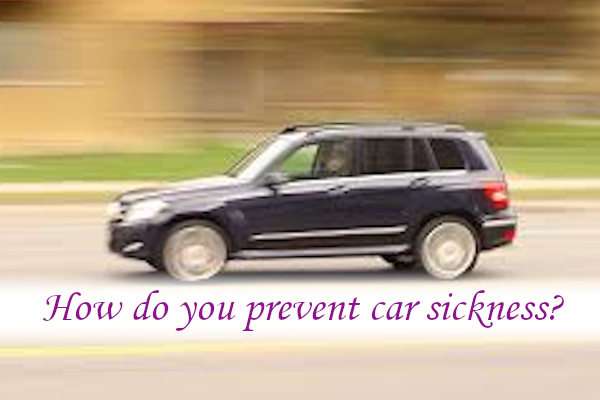 Why am I car sick all of a sudden?

I have a solution to car sickness. If you’ve tried everything that’s out there and now you’re looking on the web for an answer to how to prevent car sickness,I want to tell you about what works for me. 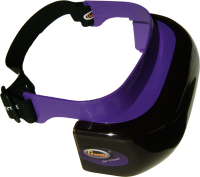 If you want to cut to the chase and see how I prevent car sickness, this is it.

I’ve struggled to prevent car sickness for most of my life. I’ve also tried everything. Some things worked, for a while, but I never really got to grips with fully preventing it.

Being someone who likes to find solutions for myself rather than relying on others all the time, I started to investigate the causes of car sickness and how to prevent it.

I arrived at the conclusion that there were two main forces at work when we suffer from car sickness.

When we are moved around and controlled by outside forces, sensory processing abilities tell us that we are moving. When we go up and down in a lift or sit on a swing, going back and forth, our brain picks up signals from the balance-indicator in our ears.

We only need one good solution to prevent car sickness.

What visual information comes from the side?

When we are still or moving slowly, any visual information that arrives from the side-direction to the eye, will be so slow and insignificant that we don’t notice it.

When we move along at speed, fast moving visual information is presented to the eyes from the front. This portion of the information will be no problem. This doesn’t, and can’t, give us car sickness because our brains are equipped to handle this information.

The big problems start when we receive fast-moving visual information from the side of the eye. Put another way, when we are in a fast-moving vehicle and we look straight ahead, there will be objects flashing past on our left and right.

Put this together with the extra challenges of all the sensory information, regarding balance, from the ear plus any other stresses and strains that life always manages to throw at us, everything is in place to give us the perfect car sickness.

A study at Imperial College, London, showed a significant reduction in travel sickness when wearing the Gamlin Travel visor. Here is the Report in full.

Many people are lucky. There are two lines of thought which have occurred to me as to why this is. It may be that their brains are able to cope with any fast-moving information that’s presented to the side of the eye. They have ample capacity to process the information and therefore, they don’t suffer from car sickness.

I like to think that this theory is less likely, partly, because, as humans, we tend to be lazy and don’t do any more than we have to, but mainly because of another theory that makes me feel less inadequate.

I prefer to take the view that those of us who are predisposed to suffering from car sickness, have brains that are more active than those who don’t. We tend to try to process all the information that’s presented to us.

Every sound, every movement, every smell and every piece of visual information that comes to us from every direction, we try to process and make sense of. This, for car sickness sufferers, leads to overload, which could easily be another description of car sickness. If we equate the condition with a computer being overloaded, a computer would probably crash.

With a computer it’s easy. We just shut the thing down and start up again. After a restart it will carry on as though nothing has happened.

We can’t do as a computer does. The nearest we can get to a shut down and restart, is a good night’s sleep.

So, now, I come to the whole purpose of this article. Preventing car sickness has been a personal campaign for me. I’ve studied the subject enough to draw a conclusion as to how car sickness happens. Enough to understand where specific challenges, to the sufferer, come from and enough to prepare a relatively simple solution that’s now available to everyone.

I offer the Travel Visor. The concept is very simple. It functions as a basic filter of visual information. It forces the wearer to only see visual information that’s contained in the field of view from straight ahead.

It doesn’t matter if the objects that are in the field of view, are moving up or down, left to right or right to left or coming straight at you. This direction of visual information is no challenge, even if it’s fast moving. Anyone who suffers from car sickness should be able to cope with this.

The Travel Visor provides tunnel vision. Wearers will notice that, in use, they will only see objects in the far distance. If the wearer is seated in a position where there is a general view ahead, only objects in the distance will be seen and because they are so far away, they will appear to be moving slowly.

This whole sensation gives wearers the feeling that the vehicle in which they’re travelling, is moving much slower than it actually is. Having filtered out a significant visual challenge, the Travel Visor wearer is likely to feel extremely relaxed, to the point of nodding off to sleep.

See more about the Travel Visor. 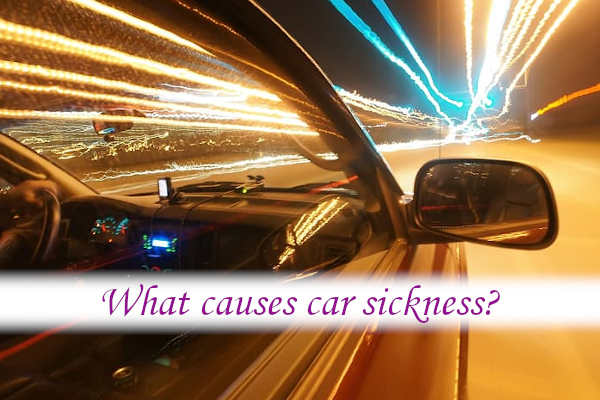 Most people believe that car sickness is only about motion and often refer to car sickness as being just another form of motion sickness. It’s right to say that motion causes a large part in car sickness.

But when you compare the actual amount of motion that takes place in a car compared to being on a boat when there are heavy seas or an aircraft going through serious turbulence, the motion from a car is relatively low-level.

If you’re unfortunate enough to be a passenger on a vehicle driven by a bad driver, then you may be subjected to more rolling from side to side. There will also be the added stress caused by late braking and often, erratic acceleration.

Bad drivers are one of the causes of car sickness

As someone who has suffered from car sickness myself, I’ve often ridden with car or coach drivers who provide an example of how not to drive.

Car sickness is reduced if the driver drives like a chauffeur

The best advice that I was given about driving any road vehicle, is to drive like a chauffeur. This is something that I’ve often felt like mentioning to drivers when I’m a passenger in a car or coach, but probably wouldn’t be well received. 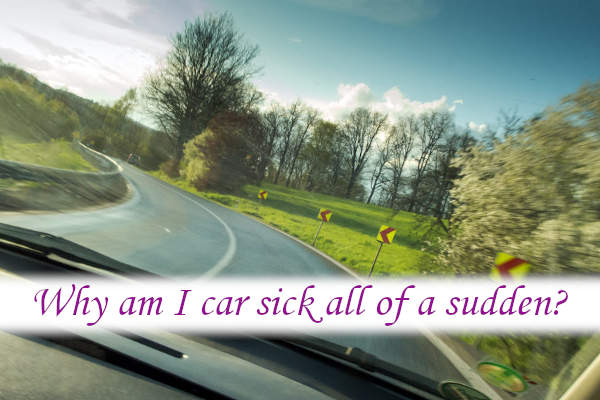 Why am I car sick all of a sudden?

If you are one of those who, generally, doesn’t suffer from car sickness, then, you suddenly become car sick, you will be wanting to know what causes this sudden bout of sickness. Unless you have an underlying condition that’s likely to make you feel car sick, there will be an explanation.

If, as a passenger, you just sit still and admire the view as you’re moving along and don’t experience any car sickness, then you suddenly feel car sick, this could be for the following reasons:

This brings on car sickness more than anything else. It makes the situation worse if, as a passenger, you’re called upon to look at and read directions that aren’t clear, for an impatient driver. Looking at a map, on the move, can be as equally challenging, causing a sudden sickness feeling.

There are good drivers and bad. If you’ve been riding around with someone who knows how to drive, then, suddenly, you find you’re having to ride with someone who’s erratic at the wheel, this could easily bring on car sickness. If you add to this, the sudden need to read any written material, then the sickness problem will be multiplied.

There’s no escaping the lights at night. If you find that bright lights bring on car sickness, sudden or not, you’re surely not alone. Wearing dark glasses will help you as a passenger but never advised as a driver. Wearing the [Travel Visor] does more than just preventing car sickness. It can help passengers to manage lights of on-coming cars.

When headlights of a car are approaching the Travel Visor wearer can turn the head slightly, placing the on-coming light out of the field of view.

Drivers mustn’t drink alcohol but passengers can and often do. When we are possibly, a ‘little blotto’, most of our senses can become disorganised when they otherwise wouldn’t be. If or when this condition happens, we shouldn’t be too surprised if we suddenly feel poorly from car sickness.

With all the pressures and strains that we sometimes encounter when out travelling, we shouldn’t be too surprised if something, anything, tips us over the edge and we suddenly feel poorly. This is when car sickness can happen.

Previous Post: How to stop travel sickness on a coach
Next Post: How do you get over car sickness?

Comments are closed, but trackbacks and pingbacks are open.

Do you know someone who suffers from travel sickness?

Well, please do them a favour and tell them about the Travel Visor.

Keep a Visor in the car!

Get a Travel Visor now!